A new business paradigm is driving the need for high-speed, software-defined storage connectivity. One in which modern multi-cloud applications use disaggregated infrastructure and where data moves on-demand to where it’s needed most, at the edge. NVMe over Fabrics are ideal for meeting the needs of these next generation workloads and those of existing applications and environments, by delivering improved performance, lowering latency, and improving efficiency.

As we’ve explored the various NVMe over Fabrics transport protocols, we’ve concluded that each is best suited for certain environments and use cases. For our initial release, we decided to focus on NVMe/TCP because it performs as well as NVMe/FC but scales to much higher speeds at significantly lower cost. Its biggest strength is its ability to leverage the standard networking infrastructure and the ongoing investments being made to Ethernet, especially in support of cloud connectivity that is constantly pushing the need for more bandwidth and lower latency. 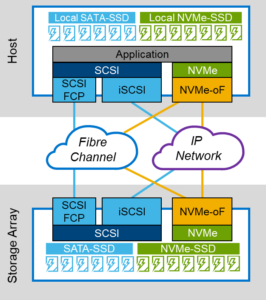 NVMe/TCP also does not require any specialized network configuration (i.e., to support lossless behavior), nor is it susceptible to congestion spreading. The biggest downside? NVMe-oF was difficult to manage at scale due to its reliance on a Direct Discovery (iSCSI-like) management model. To help address this limitation we have been working relentlessly with industry organizations like VMware to deliver Centralized Discovery to NVMe/TCP, because it allows storage connectivity to be efficiently automated at scale. In addition, we not only want to allow NVMe/TCP to be a drop-in alternative for FC, we want them to co-exist (run in parallel) with any other storage protocol making the transition to NVMe-oF TCP/IP simple for Enterprises.

To create this user experience, Dell continues to invest in NVMe IP SAN product capabilities and enhancements across the Dell Technologies’ portfolio of Storage, Networking and Compute including a new Centralized Discovery Controller called SmartFabric Storage Software (SFSS) that provides the intelligence for this automated experience.

This new NVMe IP SAN Dell portfolio becomes available for use on November 18, 2021, and along with it, we are announcing the following key innovations:

SFSS can provide the same fabric services as FC on an IP based network by combining several subservices to create the equivalent functionality.

Finally, Dell, along with several other interested parties, know how important being able to boot from SAN is, and as a result we have been driving technical proposals intended to add support for this as well.

As mentioned previously, we decided to implement NVMe/TCP first because we felt it was the best “general purpose” IP based storage protocol available. We also noticed that it could provide a tremendous performance boost when compared to iSCSI on ESX. For example, initial internal testing has provided the following results:

In addition to the work Dell has done to create NVMe standards that will ensure the NVMe IP SAN will remain open and interoperable, we’re also heavily investing in the NVMe-oF ecosystem in several important ways:

Dell Technologies is continuing our long history of helping to solve customer challenges with innovative solutions that are optimized, cost-effective, and easy to implement. It’s an exciting time as organizations small and large continue their journey of IT Transformation to help stay ahead of new demands on their infrastructures and services. These NVMe IP SAN innovations from Dell Technologies in storage connectivity automation are revolutionary and represent what we believe is the future of storage networking.