Simply listing the new features in Surveillance Station 9.0 belies the magnitude of improvements to our video surveillance suite. As we release the ninth iteration of one of our signature products, we are proud to say that users large and small will find securing their premises an altogether more pleasant and integrated experience. In Surveillance Station 9.0, everything is simply more within reach.

When you first access the new Surveillance Station, what you’ll immediately notice is the sleek dark interface. Adopting many users’ preferred look is one small way we are making monitoring a better experience, but look for the Live View and you’ll notice something more: The separation between live streaming and the former Timeline View is now gone.

In place of the standalone applications, there is now one Monitor Center that lets you scrub through recorded footage efficiently without losing situational awareness, side-by-side with your live streams, maps of camera positions, I/O modules such as door and speaker controls, camera tilting/panning/zooming controls, and more. And that’s not all, as we’ve made large and immediately noticeable improvements to each of these features. 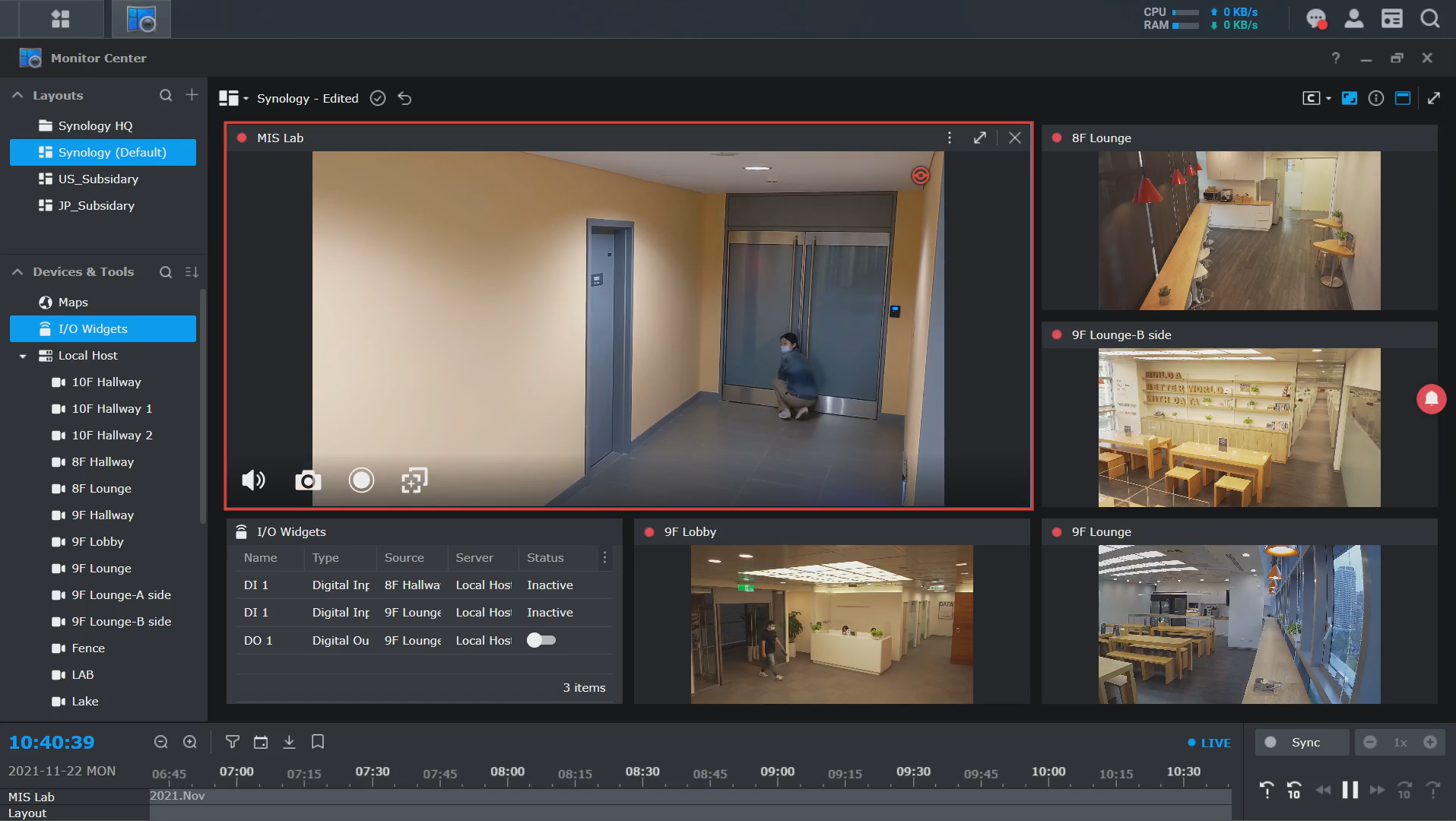 To start with what was formerly known as “E-Map,” the Maps functionality in Surveillance Station has had a complete overhaul and now lets admins create multi-layered, hierarchical sets of overlapping maps that can be used as the starting point for all your surveillance — from regular monitoring to receiving alerts and investigating incidents.

Imagine a setup with Surveillance Station deployed across a campus with three buildings and a surrounding park. Thanks to Google Maps and OpenMaps integration, you can now quickly situate each camera anywhere around the neighborhood, whether indoors or outdoors.

Did a camera detect suspicious movement or any other event? Look, an alert pops up on the map pointing you to the right location, with live feeds displayed directly on the map. Did the event occur in a building? Simply zoom into the building to locate the exact scene on the right floor, with new support for multiple-floor ground plans. 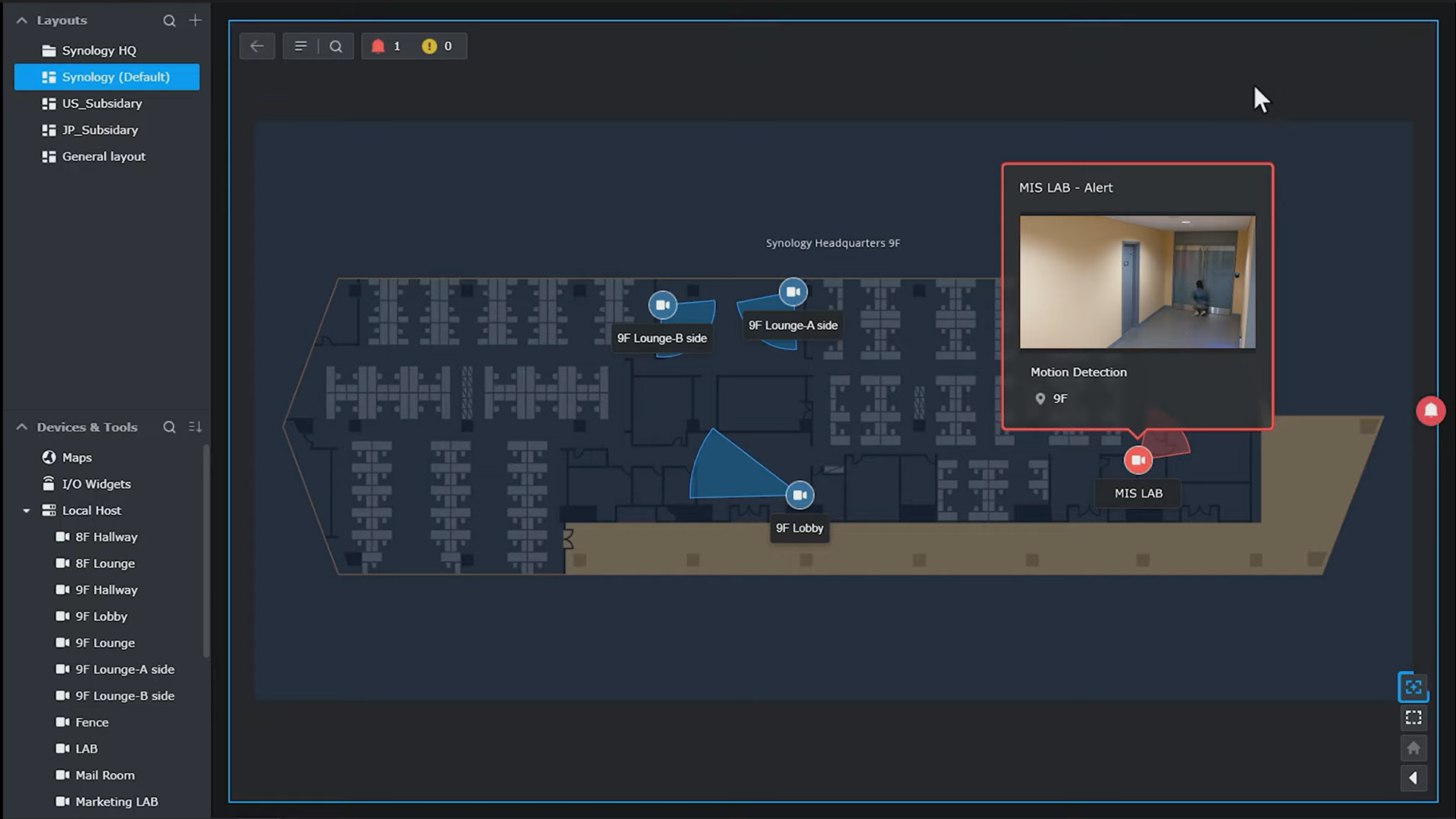 Besides finding and investigating events much more quickly, the new Maps function allows you to respond with more accuracy to any surveillance needs. Speakers, alarms, door controls, and other input/output modules can be placed on the map for easy manual operation, and it is easy for users to locate and control cameras that can pan, tilt, and zoom (PTZ) from the same interface.

Best of all, all these features are part of the dynamic Monitor Center dashboard, which is also used for scrubbing through footage. When any event you’ve defined is detected, in addition to an alert, a bookmark is automatically placed on the timeline so that you can easily review it when time permits. You can also leave bookmarks yourself, to help yourself or others find back footage and take a look.

While all these features speed up the process of rewinding and reviewing footage after spotting abnormal behaviors, boosting the amount of investigation any person can do, they also make it much easier to hand over surveillance between staff members, or for a person without intimate knowledge of a deployment to get up to speed and react adequately.

Crucially, the improvements in this update combine to facilitate securing larger premises with fewer people. With the same purpose in mind, we’ve drastically sped up the time it takes to set up or migrate large camera deployments, added support for advanced security features that help protect such large configurations, and made it possible to integrate more intelligent analytics into big, remotely managed, deployments.

New IP cameras can now be configured by batch-importing settings from old deployments in spreadsheet format, so you don’t need to manually record camera settings or repeatedly key in the same information — a feature that can potentially save hours of work. But even for new deployments, a new wizard drastically cuts the time it takes to add large pools of (new) cameras with similar or default settings. 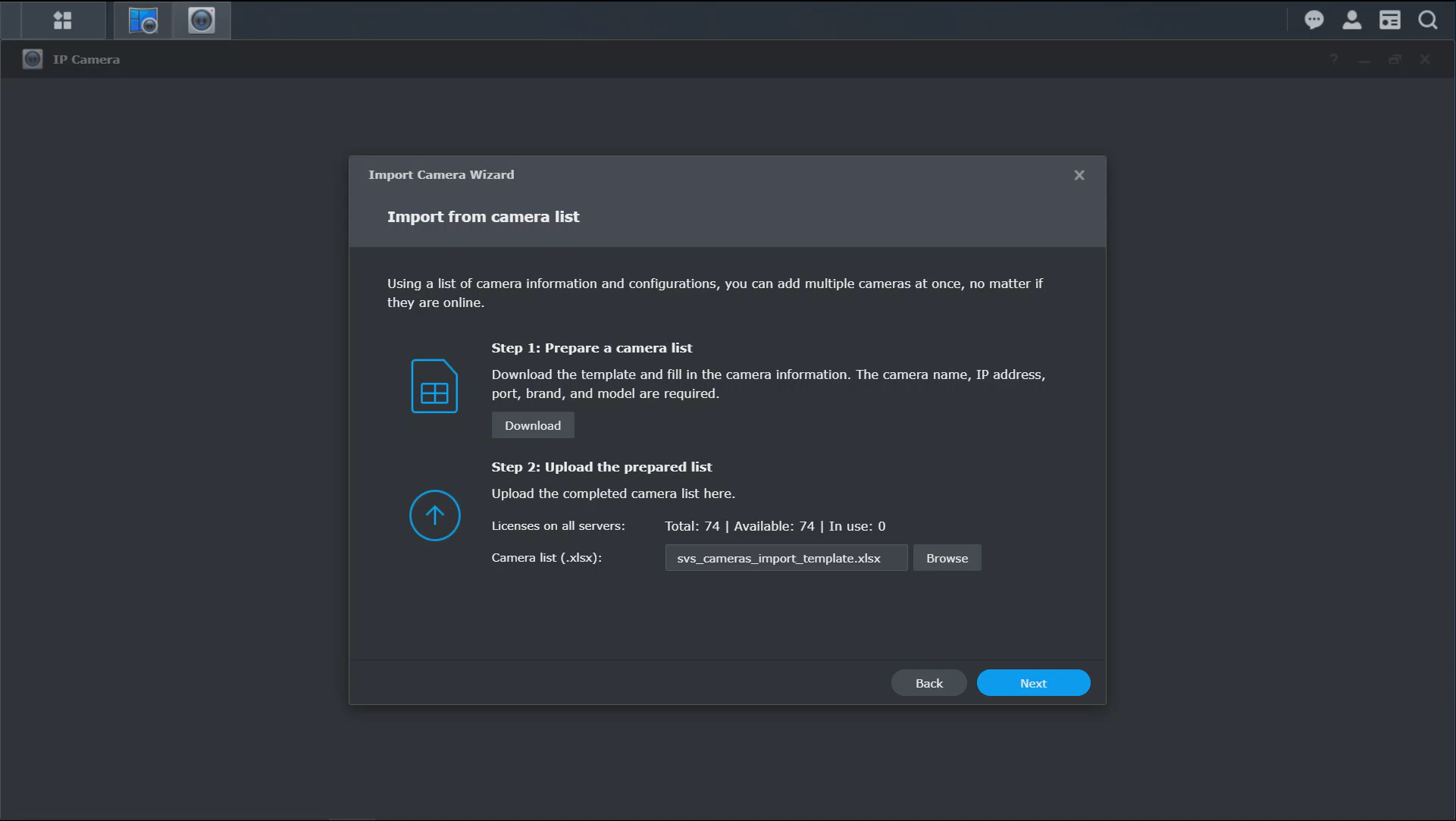 Hundreds of cameras in 30 minutes

Take for example a deployment of 300 IP cameras of several models, spread over 5 recording servers. Previously, devices would have had to be added separately to each of the servers, with a limit of 6 cameras at once. Adding exactly 60 cameras per server would require repeating the same process 50 times. At 10 minutes per iteration, that would take a whopping 8.3 hours, and even at 5 minutes it would cost more than 4 hours of precious time.

Luckily, there’s a better way in Surveillance Station 9.0, where cameras can now be batch-deployed directly from your central management server. Taking the same example, with about 10 different sets of default camera settings, we estimate that the whole process could be completed within 30 minutes. Leveraging Surveillance Station Centralized Management System (CMS) also means no repeated logins to different servers and, crucially, being able to add all devices of a certain model in one go. 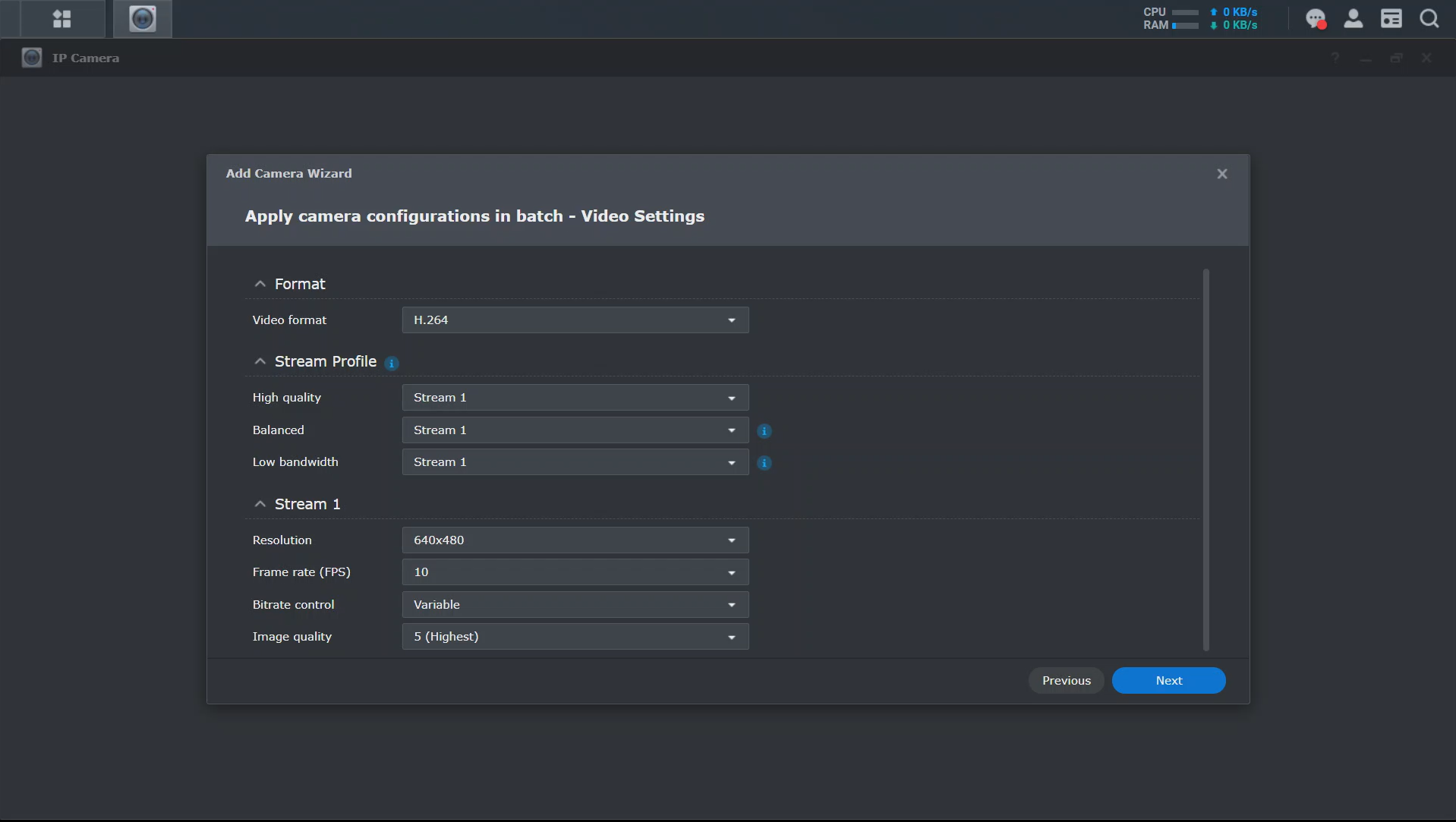 Deployments running multiple recording servers, like in the previous example, can now more easily be kept up-to-date. Admins can make sure that all NAS in their setup run the latest enhancements and security patches by enabling their Surveillance Station CMS server to autonomously download and install updates on all recording servers in the network. 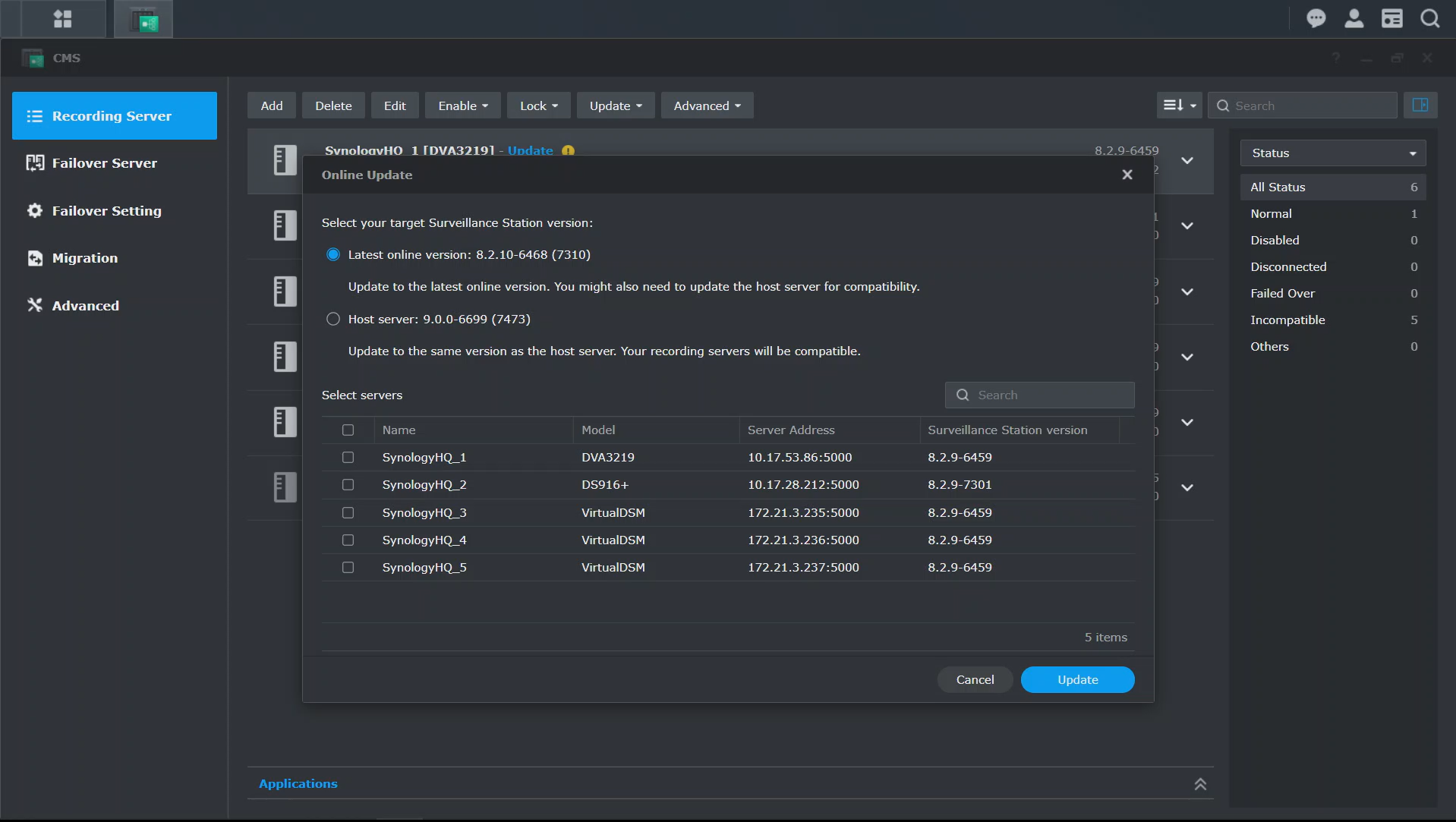 Even if their central management servers have no access to the internet, administrators need only manually upload update files once, to the CMS host, which can dispatch and install them automatically to all recording servers. Notifications can be enabled in case any server runs out-of-date software.

The larger (and more distributed) your surveillance deployment, the more important it becomes that video data from IP cameras cannot be intercepted and viewed by eavesdropping outsiders. In addition to HTTPS-secured communications, video streams themselves can now be encrypted and transmitted from IP cameras to NAS over the secure HTTPS and SRTP protocols (and from NAS to clients over HTTPS), meeting a major demand from enterprise users seeking to harden their surveillance networks. 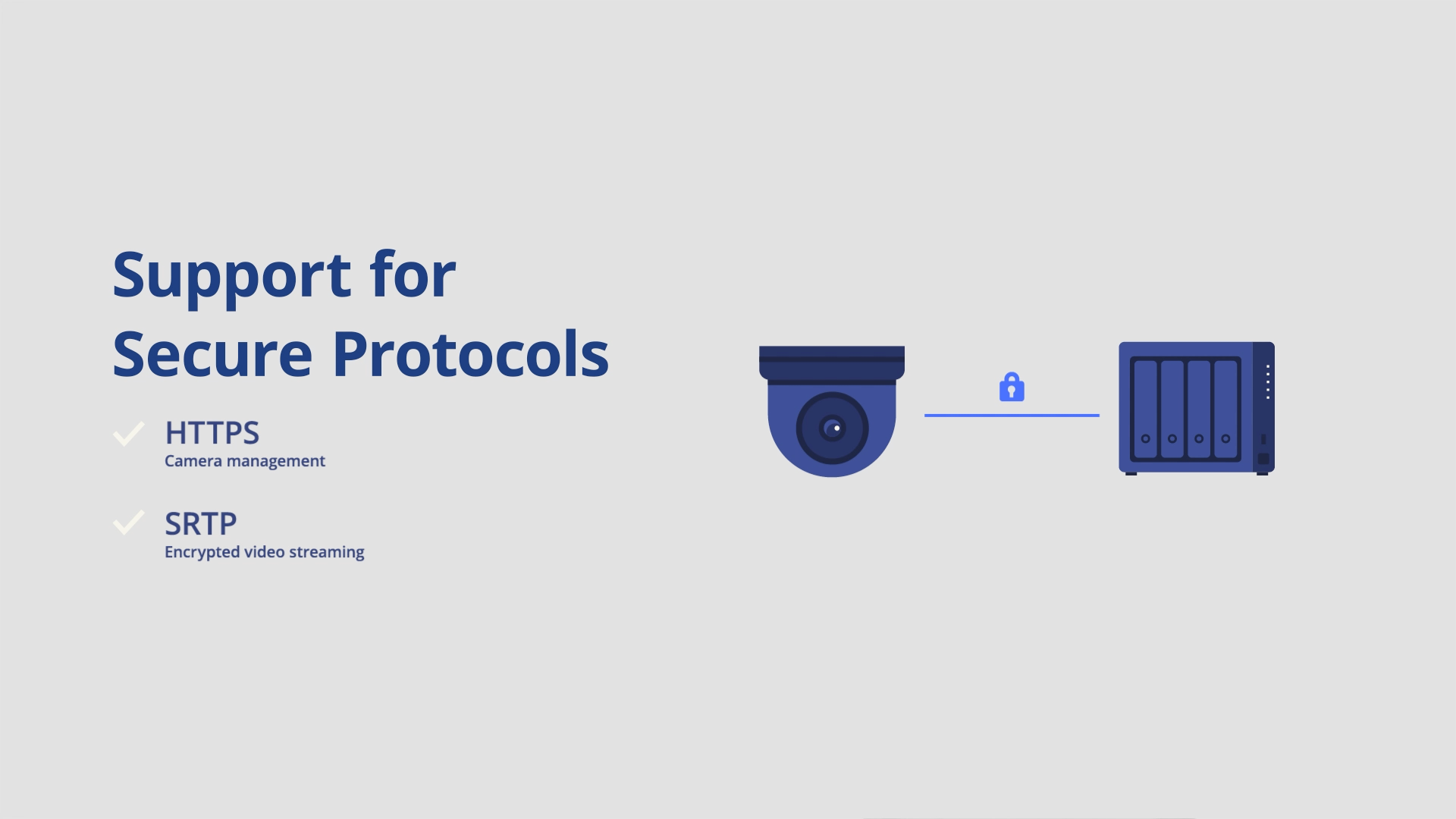 Besides preventing malevolent actors snooping in on camera streams, amid evolving privacy protection rules, organizations may also need to shield everything but live streams from their staff. To that end, the recorded footage itself can now be protected with a separate encryption implementation that goes beyond encrypting shared folders, making recordings unreadable not only in case NAS or drives are compromised or stolen, but also for unauthorized security personnel. By requiring distinct encryption keys to access archives, firms can keep a tight lid on sensitive footage. 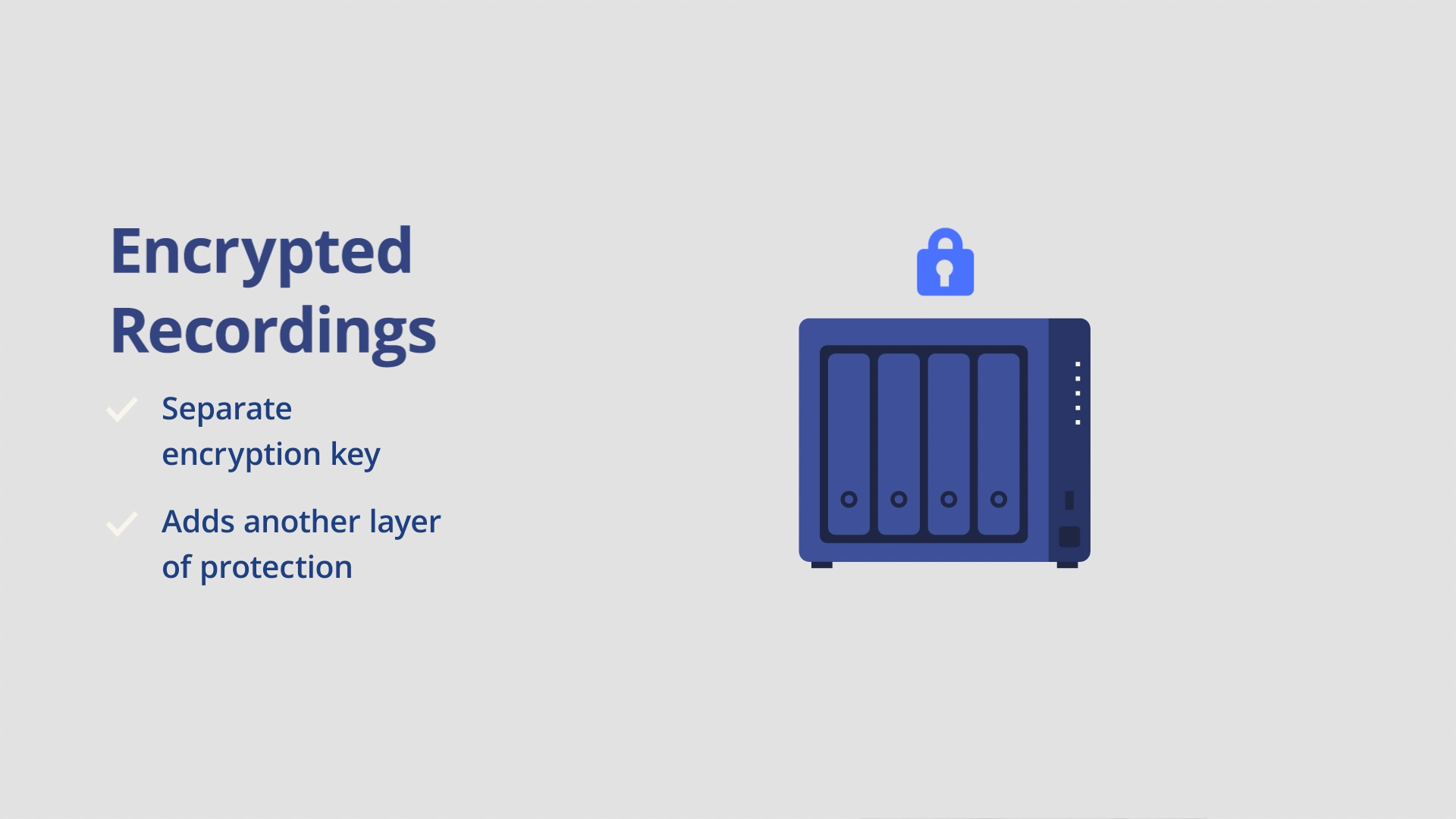 To help organizations comply with privacy rules regarding what can be streamed on CCTV, privacy-enhancing features have also been added for live surveillance streams. Privacy masks are available to obscure areas of the premises that must remain off-camera (for instance, an employee’s workspace caught on a wide-angle camera). Automatic watermarks can be applied to video files to deter unauthorized distribution and make it easier to identify their origin in case of leaks. 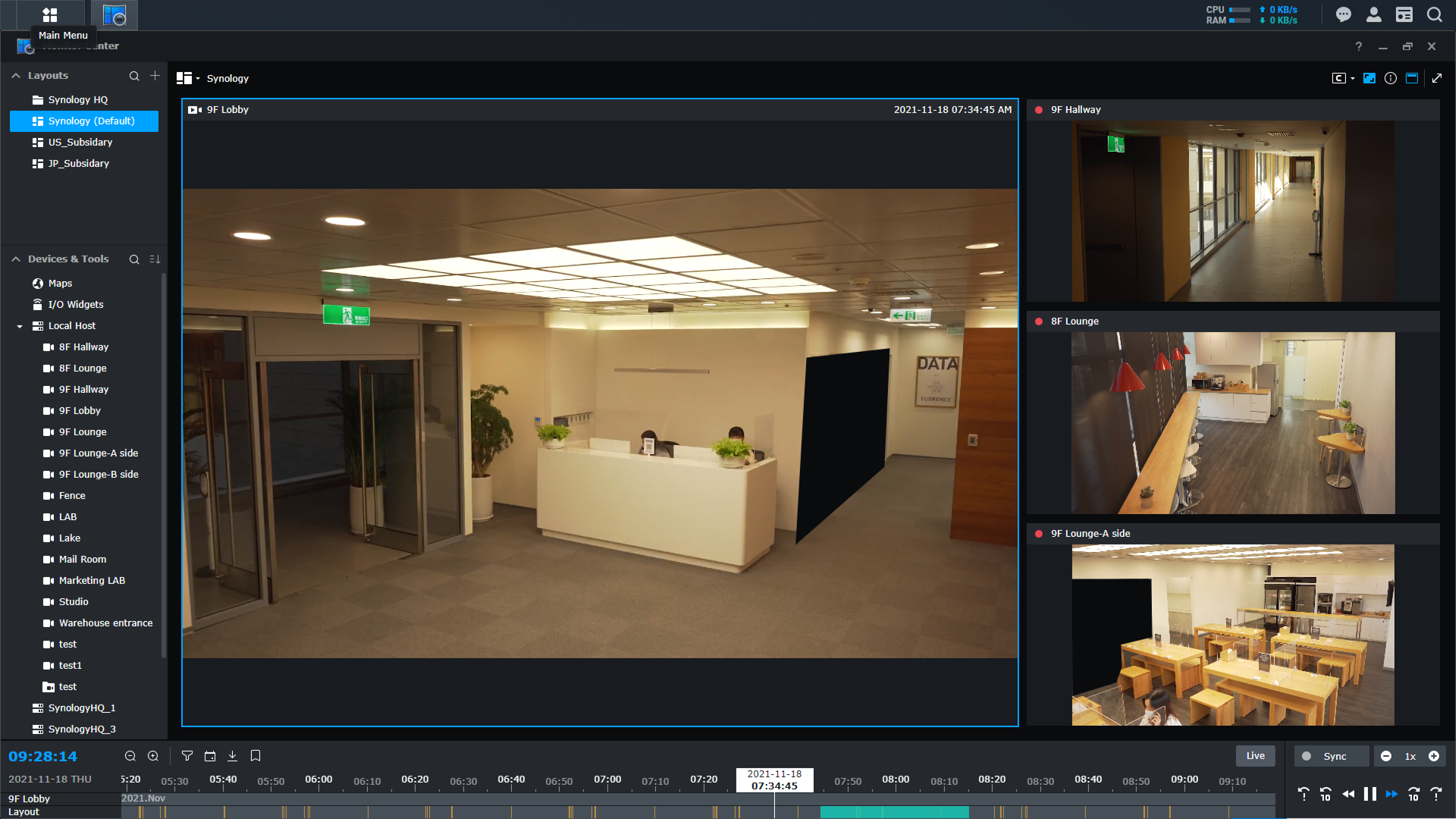 Video surveillance is a means to protect your premises against theft and other calamities, but what if your recording servers are compromised, damaged, or taken? Surveillance Station has long allowed users to back up blocks of recordings to another Synology NAS, but what if a recording server is disabled or destroyed before a batch of footage has finished replicating? Situations develop fast and crucial minutes of video may be lost forever.

One new way to overcome this risk is dual recording. While adding an IP camera, admins can choose to enable a second simultaneous recording, either on the same or on a secondary NAS. Recording twice to the same server can be useful in order to, for example, store higher-resolution recordings for a different length of time — always or perhaps only in case of events. Recording to a secondary server allows for the creation of continuous backups with minimal lag, for an ultra-short recovery point objective, and fast playback on the secondary server of the last minutes of any calamity that often present crucial evidence.

Safe recording to the cloud

Taking this protection a step further, on official release later this year, Surveillance Station 9.0 will allow users to stream and save their surveillance footage onward to Synology C2. With dual recording to Synology C2, video streams are transmitted simultaneously to NAS recording servers and the Synology C2 data center, and potential data loss is minimized to under five seconds. However, footage is not only protected — it is also kept easily accessible at a moment’s notice. Recording to C2 lets you review recordings from anywhere in the world without having to restore any files from a backup server. If required, easy clip sharing lets you get relevant footage to personnel and authorities efficiently, whether or not your servers are still available. 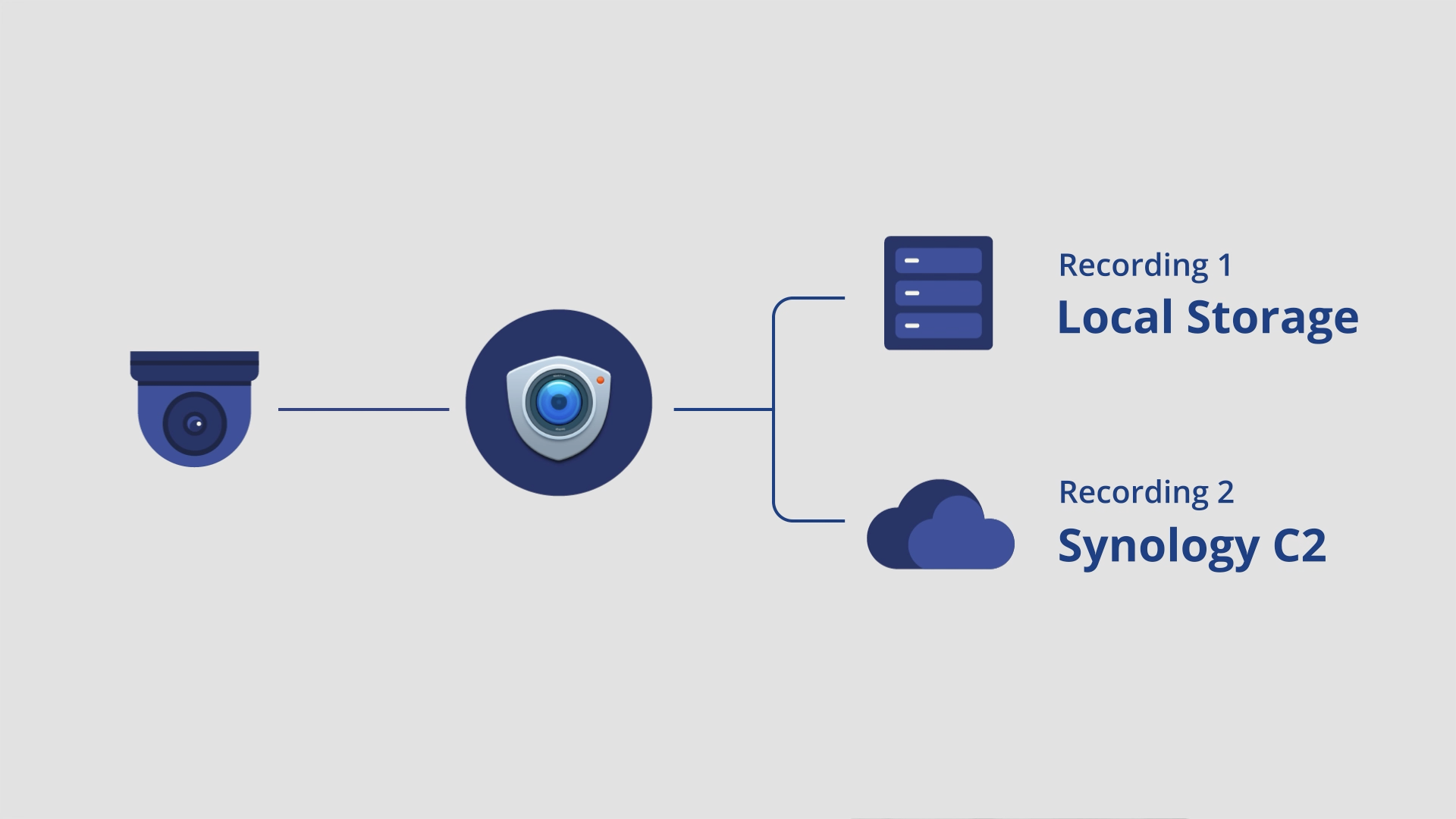 Synology C2 for surveillance is set up to provide data protection and data security equivalent or superior to local recording servers, with end-to-end encryption making sure only you (with the right encryption key) can access and review video images. Monthly plans are set to start from US$1 per feed. More details and final pricing will be announced later in 2022. 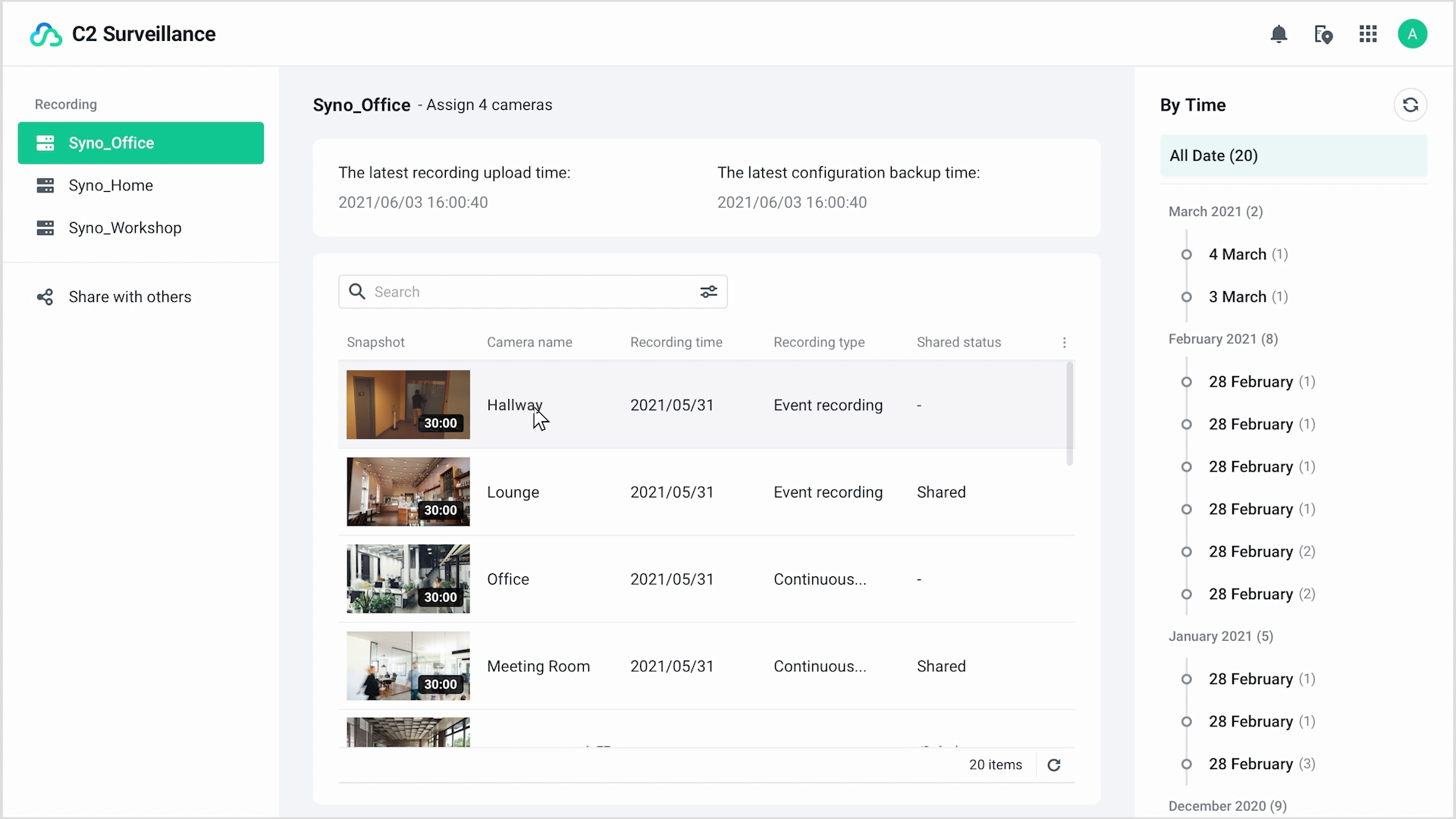 Smart analytics for all 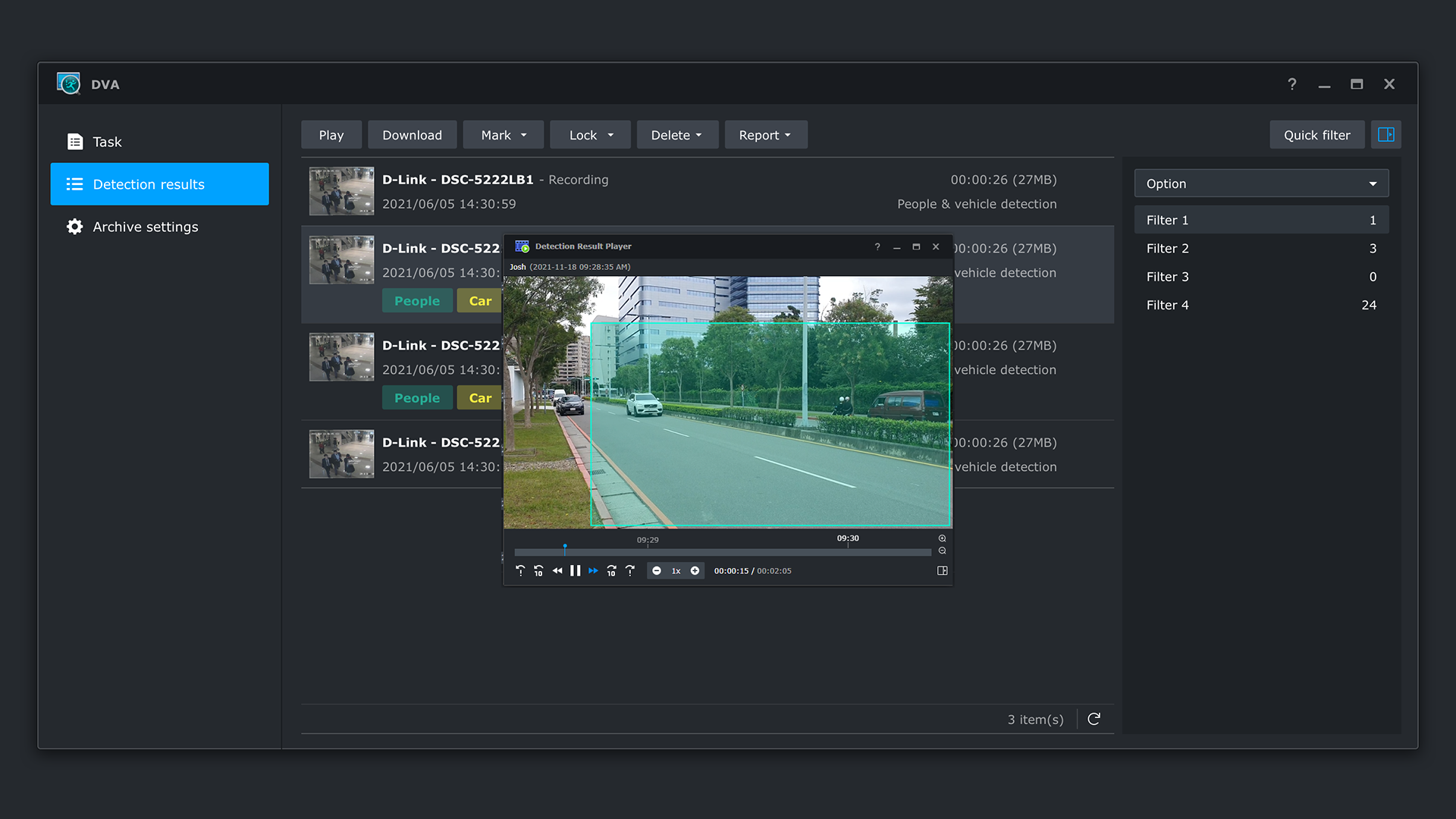 The existing modules for people counting and facial recognition have also received an accuracy-enhancing update, with a new wizard that allows users to adjust camera angle through an intuitive wizard supported by real-time data collection. When used in conjunction with I/O-module rules, these new and old detection modules can be directly linked with a range of automated actions. 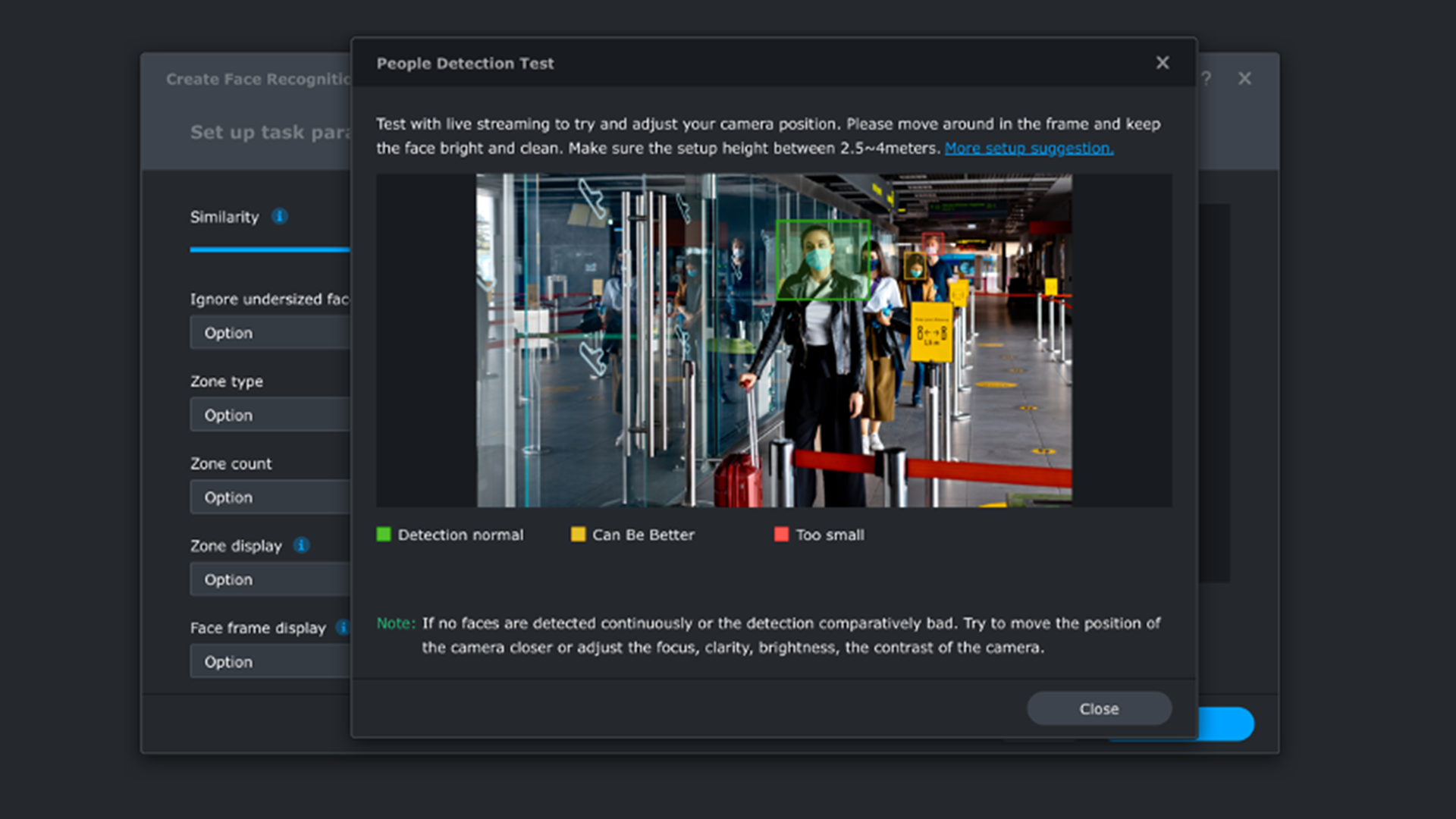 Last but not least, smart video analytics, which have for a while been limited to the powerful DVA3221, will soon be accessible to smaller businesses and households. The brand-new DVA1622 will support up to 16 cameras and offer facial recognition, as well as one other continuous analysis task of the user’s choice.

The DVA1622 will support new features in Surveillance Station 9.0 and will come out of the box with 4K HDMI output, making it both affordable and immediately ready for use in environments where a local display is needed. Integration of DVA devices with CMS since Surveillance Station 8.2 also makes the DVA1622 ideal to add new capabilities where needed in multi-server deployments. 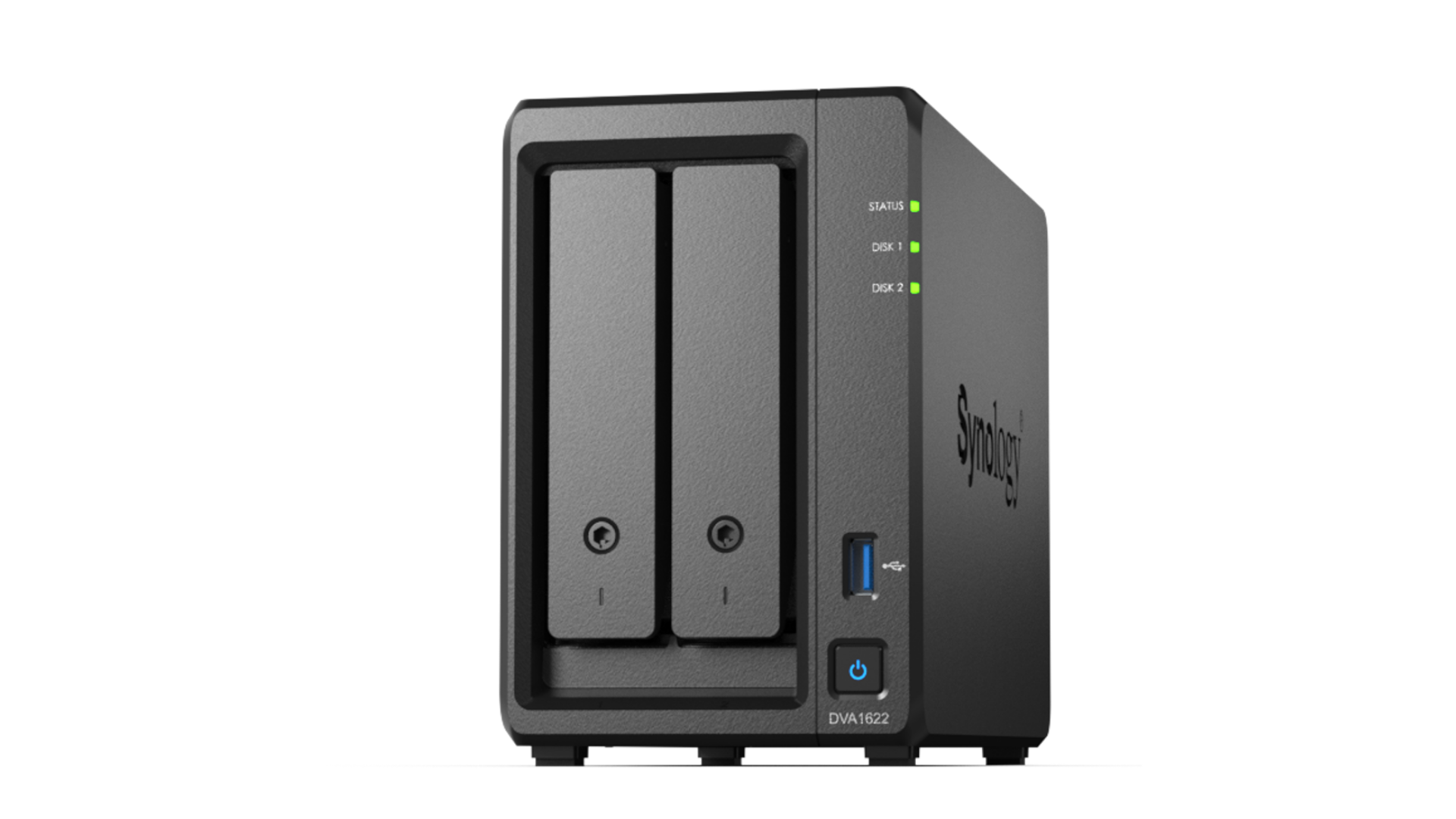 Surveillance Station 9.0 promises to make workflows and procedures significantly more efficient and has clear benefits in terms of security and safety. If you are considering Synology for your next video surveillance solution, there has never been a better time. If you are an existing user, the current Beta program is the perfect opportunity to create a test setup and evaluate how to take maximum advantage of the new Surveillance Station.

Before testing or upgrading, read the release notes to see what is happening to existing features and check the Surveillance Station 9.0 Beta page for a summary of highlights and more feature demonstrations. Would you like to watch a video overview of what’s coming to surveillance and other solutions? We invite you to watch our Synology 2022 AND BEYOND sessions for more details and demos.

With Surveillance Station 9.0 and other updates expected in 2022, we are showing our commitment both to bolstering the capabilities of existing Synology deployments and to prepare our product for ever more complex implementations, as our customers and the trust they place in our video surveillance solution grow to new heights.