When will EAMR first be deployed?

The industry will need to move to EAMR to allow data to be written on disks with much data higher data density.

On a hard drive’s disk platter, each data bit is stored on a group of tiny particles referred to as grains. The bit’s value is defined by the grain’s magnetic orientation pointing in one direction or the opposite direction, denoting a binary digit 1 or 0. To fit more data into a smaller surface area, the grains must be packed closer together and made smaller. But when the grains get too small they become thermally unstable, and therefore the data bits become unstable as well.

EAMR drives use a disk media with more-stable magnetic materials than today’s media, so the data that is written also becomes much more stable. But that means it also becomes more difficult for an EAMR drive’s write head to flip a bit from a 1 to a 0. To write on this media requires magnetic fields much larger than those conventional recording heads can produce, even if stopgap technologies such as field assist devices (FAD) are added to the head (see more on FAD below).

So EAMR drives use another transducer that directs energy onto the media surface, thus reducing the amount of magnetic field required to write a bit.

MAMR disk platters use today’s standard CoPt (cobalt-platinum alloy) media, re-engineered to make it more stable. To enable writing to this more-stable media, MAMR technology uses a spin torque oscillator attached to the recording head. It generates a microwave field which does not heat the media; instead, microwaves cause the magnetic particles to “precess,” or wobble like a spinning top pushed off balance, making them easier to flip over with the magnetic field from the head.

Meanwhile, HAMR uses a new, intrinsically more-stable FePt (iron-platinum alloy) media. It is not possible to write on FePt using conventional PMR or MAMR. Instead, HAMR recording uses a small laser diode attached to each recording head. The light from this laser is focused onto a near field transducer (NFT) which in turn, heats a tiny area on the surface of the media with a short laser pulse when the head applies a magnetic field. This “softens” the magnetic grain enough to write data. According the ASTC, ultra-high coercivity small-grain FePt is the only media suitable for drives at about the 30TB-and-higher range. 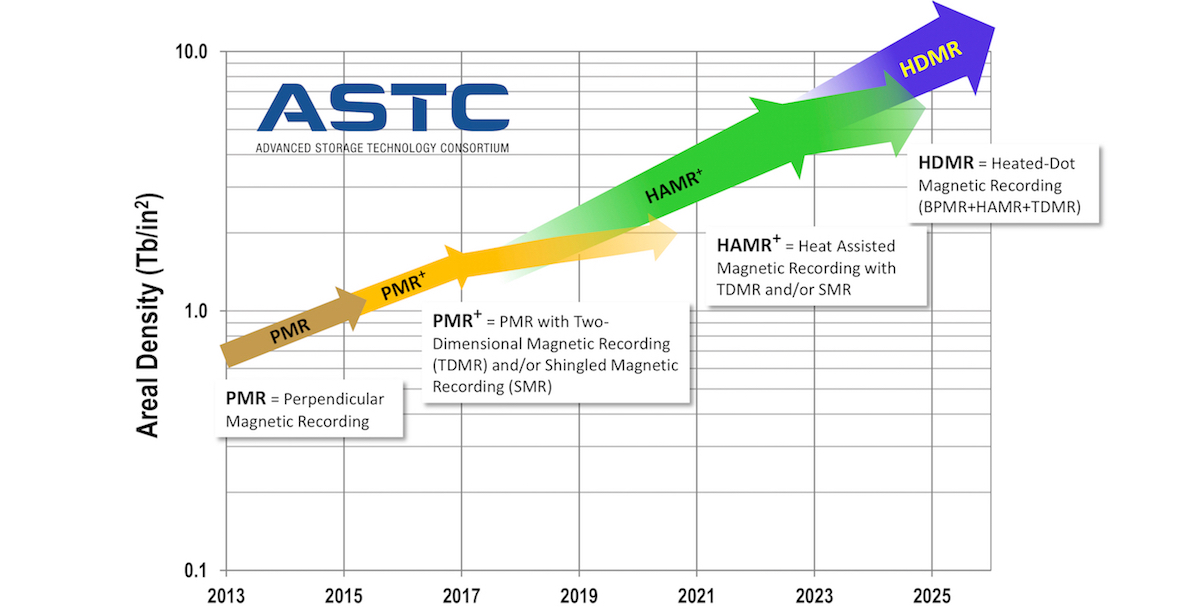 Prior to EAMR, FAD provides a stopgap

Also discussed at TMRC this year was the introduction of field assist devices (FAD), a stop-gap technology now being deployed by some drive makers who’ve used it to achieve 18TB capacities, as they aim to extend the usefulness of PMR before deploying EAMR. (With continued technology leadership in head and media technology, Seagate was able to deploy its 18TB Exos drive using standard PMR technology following our leadership position with 16TB PMR volume shipments.)

FAD technology uses additional energy applied at the write head to improve the magnetic field emanating from the head. This makes the head slightly more effective at flipping bits from 1 to 0 in the media.

A key differentiator between FAD and EAMR is that FAD improves the magnetic field from the head, whereas EAMR is defined by ASTC criteria as providing energy directly to the media, which makes the write head’s job easier.

Internal analysis indicates FAD provides a one-time areal density gain of around 5% as a PMR extension.

There are no EAMR HDDs yet shipping in volume in the industry. The first EAMR drives are expected this year, with Seagate HAMR drives at the 20TB capacity point. Seagate demonstrated its 20TB HAMR drives at its recent Datasphere Conference.